Conversations Wars (Part 2) – What does the future look like?

Conversations Wars (Part 2) – What does the future look like?

Continued from Part 1 of the Conversations Wars series which talks about the overall landscape of conversational products and the higher maturity in the enterprise space as opposed to the much spoken-about consumer space. Conversational products have been gaining a lot of attention in recent time but it’s still a 3–5 year horizon before they become mainstream.

Here are some things which are likely to happen within that timespan in the near future which will significantly shape how this space evolves, particularly in the consumer space: 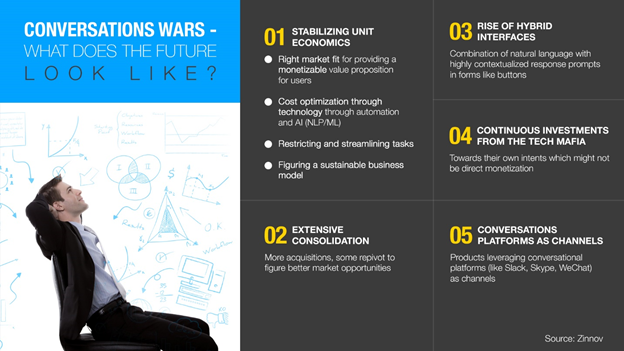 Most of the conversational products have terrible or no business models with very unsustainable unit economics. Except the ones like Google Allo whose intent is gathering data and not direct monetization, investors are going to want to see some money, and soon. This includes several aspects that impact unit economics.

● These products will try to find the right market fit to provide a monetizable value proposition for their users. Several of the chatbots on Slack and Hipchat like Howdy, Nikabot, etc. are good productivity hacks but currently have limited potential for monetization.

● For categories like concierges which have a lot of human effort involved, it’s very expensive to have manual operators sit and respond to all texts, so optimizations through automation and AI (NLP/ML) will come into the picture. This includes using NLP to categorize types of requests, providing auto-fill options for most common tasks and the like.

● Though several of the concierges like Magic claim to do “anything as long as it’s legal”, it’s not sustainable. These players will start restricting and streamlining tasks that they help users complete. Some players like Dunzo have already started doing this by turning down some arbitrary customer requests. (Restricting tasks is slightly ironic because they all start as concierges that can get “anything” done but it’s a necessary evil for sustenance)

● These products will also try to figure a sustainable business model. While email assistants like X.Ai are in closed beta while they strengthen their AI, the concierges either have a flat fee model where the customer pays them or an affiliate model where the merchant pays them but these are not yet robust. Interesting, many small chatbots have been funded by broader conversation platforms to strengthen their ecosystem (Eg.: Slack has a dedicated Slack fund which invests in Slack-first bots, some of which include Howdy, birdly, awesome).

There has been a spike in the number of these products lately and there will be consolidation as the space matures. This has already begun with the tech mafia gobbling up some of the better players in the market (Samsung-Viv, Microsoft-Wand Labs, Amazon-Angel.ai), we can expect more acquisitions in the space. Some of these applications will repivot to figure better market opportunities they can cater to. Eg.: GoBulter began as a concierge application, gathered a ton of data and repivoted to Angel.ai providing natural language processing for commerce (and eventually acquired by Amazon). Helpchat recently laid off its chat team to pivot to an AI-based Google Now-type personal assistant Tapzo.

Hybrid interfaces are the really the most optimal conversational interfaces. What is that you ask? In simple terms, It’s a combination of natural language along with some highly contextualized response prompts in forms like buttons. Not everything can be done through natural language text and sometimes, your user just doesn’t want to do it through natural text because it’s just too much effort. In May’16, when Helpchat laid off ~150 people to pivot away from chat, their CEO said: “Finally somewhere in Sept 2015 it became obvious that the problem was chat. Does it really make sense to chat to get a cab when you can simply tap once and book”. This summarizes the need for hybrid interfaces. Recent moves in this direction have been Google Allo’s interface, Haptik’s two-level chat interface and buttons in Facebook chatbots.

Google Allo understands context within a chat conversation and auto-populates buttons from which you can pick a response. For example, if a friend pings you “Dinner tonight?”, Allo throws two on-screen buttons with “Sure.” and “Next week maybe?”, you click on one and the text is sent. This is a fantastic example of a highly contextualized hybrid interface that saves a ton of time for the user. Haptik, a concierge, uses a two-level interface, where in the first level, like a usual phone all, you click on a button based on your type of task (“phone recharge”, “utility bills”, “news”, etc.). In the second level, it shows the most frequent queries in the category as buttons that you can just click on or type your query if it’s outside of these. The categories and prompts are populated based on customer transaction data gathered over months of usage. Facebook similarly allows for button responses with its chatbots.

Continuous investments from the tech mafia:

The tech mafia has been investing heavily in conversational products for their own reasons. Google Allo helps Google get more data on their customer, Slack’s slackbots improve Slack’s versatility, Microsoft has strong interests in using conversational products for productivity through integrations with Skype (check Microsoft’s Slack-clone Skype teams and the Microsoft Bot Framework), Facebook is experimenting with Facebook M which could potentially go hand-in-hand with their Facebook at Work efforts. These investments with continue towards each of their own intents though the intent in most cases might not be direct monetization.

Several of these products will start being present on conversational platforms (like Slack, Skype, WeChat) as channels of access for their users in addition to their own apps. For example, Howdy started and continues to be a Slack-first bot for automating common office workflows. Chumenwenwen, a Chinese concierge application by ex-Google ML folks, started as a public account on WeChat before having their own Android app (a common route for conversations products/chatbots in China).

If you would like more information about the space, feel free to drop us a note at disruptor@zinnov.com.

About the author: Vignesh Balagopalakrishnan is a Management Consultant at Zinnov who works with the Engineering Excellence team specializing on disruptive technologies

Have a query? Reach out / Schedule a meeting with Zinnov’s Engineering Practice Head directly here : https://zinnov.com/global-center-setup/ 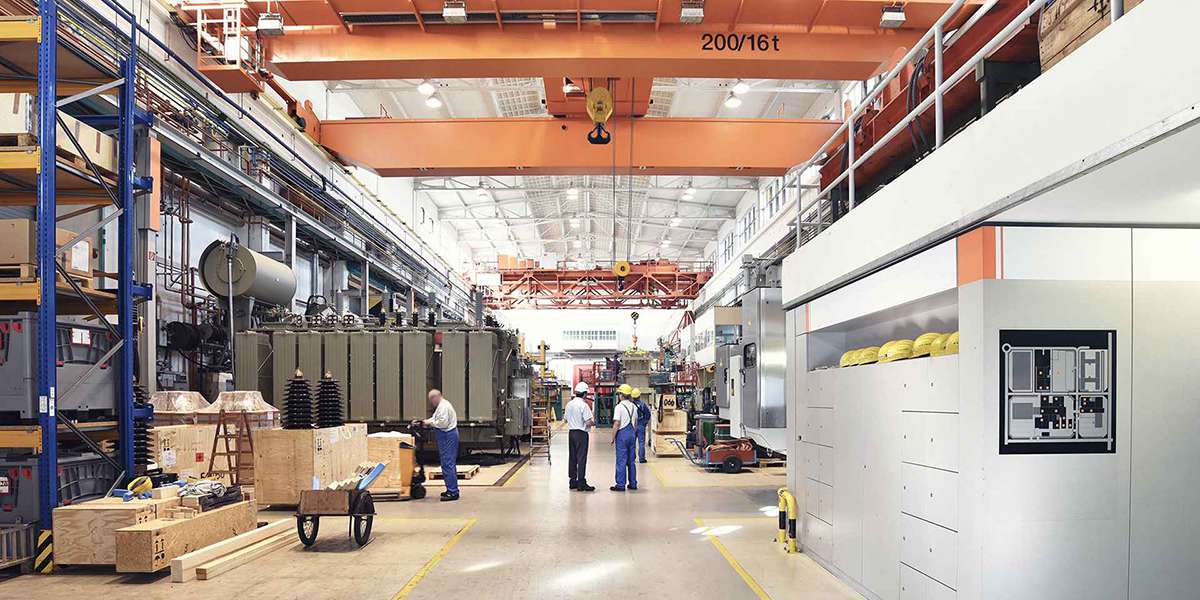 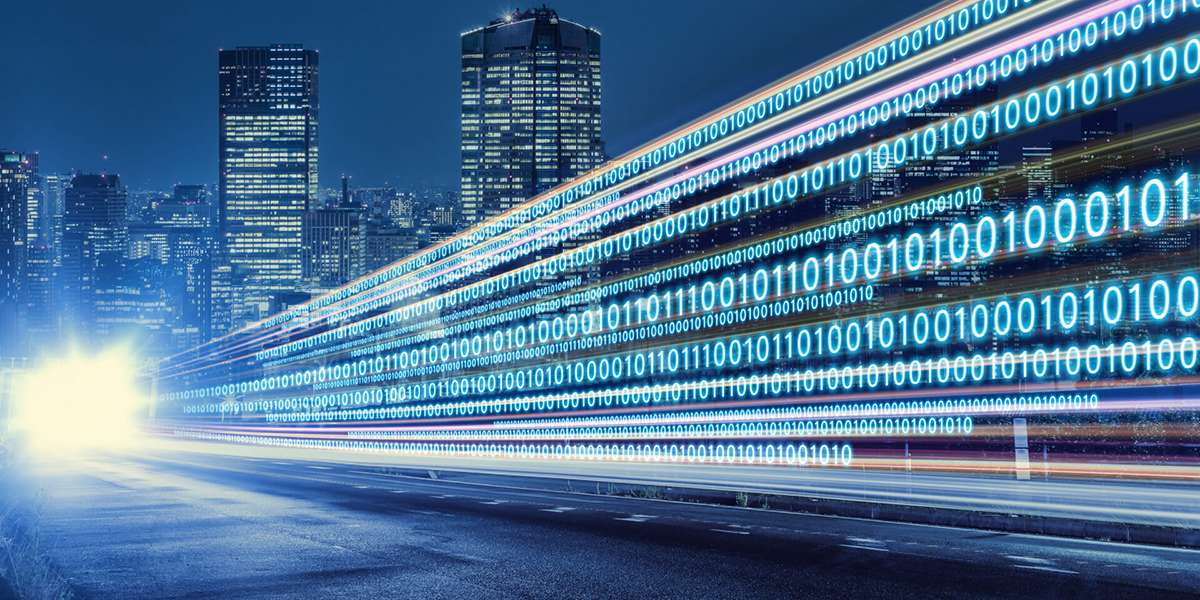